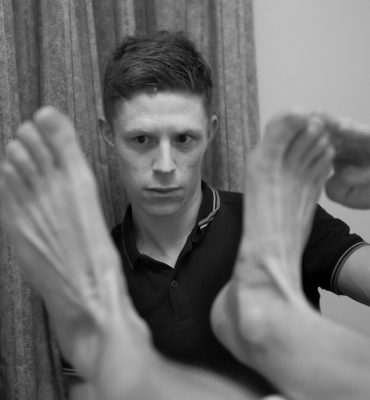 Alasdair is our Sports Therapist (BSC) and member of the Society of Sports Therapists. He graduated in 2011 and has been practicing ever since. Alasdair is also a keen runner and involved with local athletics clubs, so has lots of experience working with runners. He has worked with multiple international athletes including GB mountain runners, marathoners, snooker players, cyclists and climbers. Being based in a Crossfit Gym, he has also worked with lots of cross fitters of all levels and understands the high intensity and strength required to progress in Crossfit.

He has a key interest in working with people suffering from overuse sports related injuries such as achilles pain or anterior knee pain. As a current County level runner himself, Alasdair understands the needs of runners and other athletes to return as quickly as possible and also understands the psychosocial implications of not being able to participate in your chosen hobby/sport/activity, which can be a massive part of people’s lives.

Since graduating, he has specialised in sports injury management and prevention with a focus on return to sport aims. However, he has also gained a lot of experience working with elderly patients and assisting in rehabilitation, or ongoing exercise maintenance following orthopaedic surgery.

From Pain to Performance 2013

From Pain to performance conference 2016

The Arm Clinic – From rotator cuff tendinopathy or arthropathy 2018

Dropped into WCF on a recent trip to the lakes, what a lovely box, like a hidden gem with the amount of equipment they have.

Amazing Classes tailored to your capabilities. Liam and Jay are fab instructors who help you see results fast.

I’d been interested in trying CrossFit for a while, but there weren’t any gyms around Kendal so I was excited when I heard Westmorland CrossFit was opening in Kendal. I sent an e-mail to Liam who invited me to come down and have a look at the gym and have a chat with them.

WCF has become a home from home for me. If it wasn’t for the amazing coach and members I wouldn’t be where I am today mentally and physically. You guys really did save me. If you want a place where everyone is welcome and you can become the best you’ve ever been this is the place.

Unfortunately we have had some cancellations on ou

We seen many people struggling with this lockdown

This error message is only visible to WordPress admins